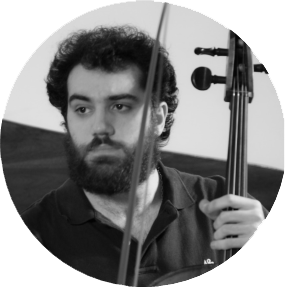 My name is Jorge Rafael Abuchedid and I am a public and scientific-literary translator of English and Spanish (Universidad del Salvador). My main areas of interest are philosophy, social science, psychology and the arts, especially music and literature. I also devote myself to the study of Early music —in particular, the Baroque period— and to playing Baroque cello (Conservatorio Superior de Música Manuel de Falla).

This blog stems from my concern with exploring different subjects which are absolutely fascinating for me. One of my greatest passions since childhood has always been reading, and in the profession I chose, translation, I found a tool to satisfy two needs which arise from my curiosity: on the one hand, learning to immerse into a text, understanding what it says —either explicitly or implicitly—, being an “attentive reader”; on the other hand, being able to share with others the treasure I discover in reading something interesting, edifying, which makes me consider a new aspect of life. Hence, the articles published on this site are translations of original texts in English or Spanish I chose to work on, precisely because I consider them worth reading, and I would like to make them available to a whole new readership, a whole new language.

My choice of authors and texts, then, shall always reflect my intention to transmit thoughts and ideas which may fulfil the ideals Cicero attributed to Classical rhetoric: Docere, delectare et movere, e.g., “Teaching, delighting and moving.” Anyhow, it is worth it —moreover, it is necessary— to clarify that, interesting as I may find the original texts to be, they do not necessarily express my own views on the subjects discussed; far less, my full or partial endorsement of any author’s views. In that sense, in doing my work I shall aim at being faithful to objectivity in translation, especially in the case of those texts which, though contrary to my own opinion, are nevertheless valuable or important in the development of my thought.

Tras la palabra [After the word], however, intends to be first and foremost a blog on translation. I do not pretend at all to be an expert on the topics discussed: I think it is more valuable to let the authors speak for themselves. What I would like to discuss and —gladly— debate upon are the vicissitudes and the experience of the process of translating these texts. My purpose is to make brief commentaries on those translations which, for whatever reason, raised difficulties or dilemmas which translators will recognise as part of the most characteristic and enthralling challenges of our profession. Non-translators, in turn, will have the opportunity to appreciate the art of translating and, perhaps, to reach more deeply into the contents of the translated texts, by knowing the process of (re)creation from the original text.

Finally, I would like to explain the name of this web page. One of the greatest puzzles about human thought is made evident in the problems raised by trying to translate the polysemic Greek word λόγος (lógos). The Ancient philosophers had already given diverse meanings to that term, among which we may find “word” and “reason”; yet, none of these and other terms could encompass the nature —both confusing and clear— of λόγος, which reflects the intimate union existing between thought and language. So intimate it is that language not only serves as a means of expressing thought, but also gives it form by articulating it: it informs thought. Thought seems to be a prisoner of words; hence, translation is traditionally considered to be an impossible task. And yet…

Reason in itself escapes words and needs to leave them to create, it needs to go beyond to remain vital, and even to express itself. Thought is and is not the word: this is the mystery of λόγος. Thus, I consider we should better think of translation not in terms of possibility or impossibility, but more properly as a mystery. The translator’s task is daring to transcend words and looking for other means of expression, other words which may give new life to that thought which intends to be communicated. What happens, then, when we go after the word? That is what I wish to discover.